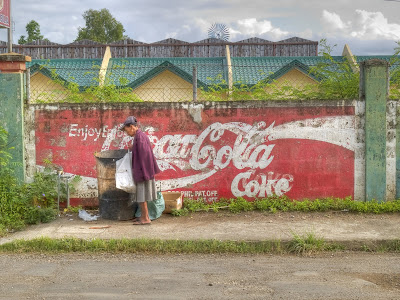 "To realize one's destiny is a person's only obligation" - from The Alchemist by Paulo Coelho
This line from Paul Coelho's book struck me as emblematic of our (Western) outlook on self-actualization.
What is "one's destiny"? To a person from my parents' generation and the one before that, their destiny involved seeing their children go to school (read: University), getting jobs, and starting families. Self-fullfilment was achieved with the success of their children. Parental self-sacrifice was not an option...it was a given. This culture lives on in societies such as the Philippines where a significant percentage of the population go in search of jobs all over the world. The people endure unimaginable hardships so that they may send money back to their families in the Philippines. Remittances from OFWs (overseas field workers) now constitute the biggest source of foreign revenue for the Philippine government.
The societal cost from family members separated from each other for extended periods of time is staggering. Dependence on foreign remittances is unhealthy...a dip in the world's economy is bound to be felt the most by those in the lower rungs of the social ladder: the caregivers, the merchant seamen, the unskilled labourers.
Much has been written on this subject by more qualified people. Coelho's line simply reminded me of where I'm from and where I am now.
Be nice to everyone, especially the person who serves you, who works for you. Everyone has their story...and there but for the grace of God, go I.
at April 22, 2009 1 comment: Links to this post