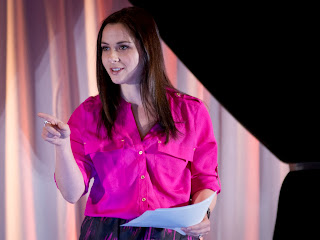 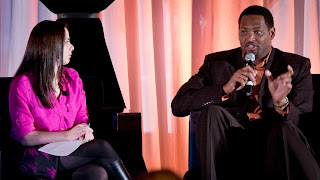 The CBC's Andi Petrilli, interviews one of the NBA's all-time greats, Robert Horry. April 25th, at the Intercontinental Hotel in Toronto.
Being listed at 6'10" (he played mostly as a "small forward" in his career), you'd think Horry would stand out in a crowd. Well, he does by being tall but his self-effacing personality gets him down to the eye level of your average person. He is a genuinely pleasant and  humble guy who is just "one of the guys".
Here are a few of Horry's amazing stats:
- one of only 9 players to have won 7 or more NBA championships, and the only one who didn't play in the 1960s Celtics,
- one of only 3 players to win consecutive championships with 2 different teams,
- one of only 2 players to win championships with 3 different teams,
- first player to accumulate 100 steals, 100 blocked shots, 100 threes in one season,
- holds the record (NBA Finals) 7 steals in a game, 5 3-pointers in a quarter,
- all-time leader in play-off games played with 244
Horry is known as Big Shot Rob because of his cluth shooting in important games and he is widely considered to be one of the greatest clutch performers in NBA history.
at April 30, 2013 No comments: Links to this post 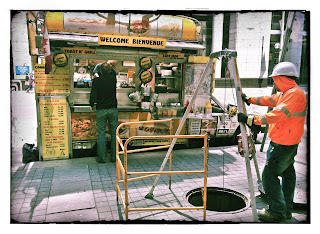 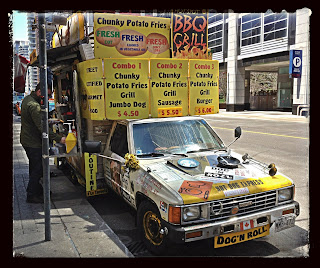 "277 Million Boston Bombings": grasping the significance and a view to a balance.

A sobering view on the Boston Marathon bombings in a world gone mad with hundreds of bostons.

277 Million Boston bombings, by Robert Scheer
in The Nation and, Truthdig
at April 24, 2013 No comments: Links to this post

"i look for the light but it is hiding so close to me"
~ by Tobi Hooper
I love this quote because...

it's tells us that love, salvation, bliss,
whatever it is one is looking for is just around the corner,
that it's all up to us to save ourselves,
that we are our own gods,


and that we are all in this together
in this beautifully wretched world,
as it was then,  as it will be forever...
at April 23, 2013 No comments: Links to this post


From a shooting-a-video perspective, the place sucked: too dark, with barely enough room to set up a tripod, and one too many tall guys in front of me.

From a music experience perspective, as Levin Maaskant (is that a cool name or what?) would say at the end of the set, "fuckin awesome"!


Arkham (from Batman) Awaits is a made-in-Guelph band that is described by Gain Music as:
"Arkham Awaits is one of the newest incarnations to come out of the Guelph metal scene. Formed in early 2011, this band has already caught the attention of many fans and fellow lovers of metal alike. Every show this 5-piece melodic hardcore band play is a learning experience and although they are new to the scene they are mature beyond their time. Reminiscent of a young Alexisonfire, with catchy riffs that hook you in mixed with a certain punk rock element that can't be ignored.
As soon as you meet the band you know they're in it for the long haul. With a handful of shows under their belt and an energy that is evident as soon as you meet them, these guys will throw heavy riffs and shout at you from the stage and kill you with kindness off. Definitely a band who will be contenders for "Nicest Dudes in Metal" over the next few years."
Kyle Bushert - Vocals, Paul Skinner - Guitar, Steve Brown - Drums, Levin Maaskant - Guitar, Vocals, Nic Brent Emeny - Bass
Nick Wever - Guest Vocals
at April 23, 2013 No comments: Links to this post

A dreamy, magical, spring day in Kitchener where two beautiful, compatible souls tied the knot surrounded by friends at the historic Walper Terrace Hotel.
Music:  "Angel" by Jack Johnson , and "If You Were A Sailboat" by Katie Melua
at April 19, 2013 No comments: Links to this post

A view on education and career opportunities: mediocre column with a fantastic comments section

"It's not about college or university, it's about life-long learning"
at April 18, 2013 No comments: Links to this post 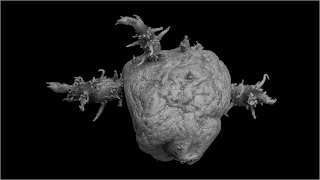 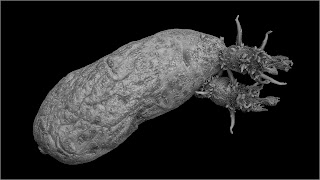 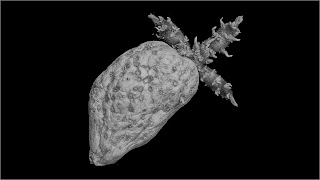 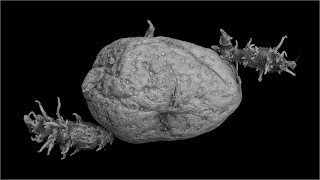 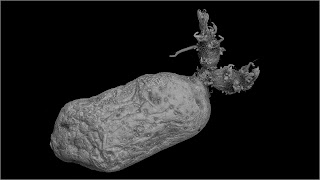 Email ThisBlogThis!Share to TwitterShare to FacebookShare to Pinterest
Labels: Minolta 5of3.5 Macro, potatoes, Sony a57

Arthur Harkins with Sun Circuit at the Red Brick Cafe

The Red Brick Cafe is a great place for a coffee and spending hours on your laptop (free wifi), as well as for wine and sweets. The Cafe schedules performers (music, readings) on a regular basis. The exposed brick, high ceilings, and rotation of artworks on the walls, all situated in the old stone-and-brick part of Guelph lends the Cafe a European/bohemian University-town flavour, with just a hint of gentrification creeping in. It's fantastic in a lot of ways but shooting a video in "natural, cafe" light, it is not.
It is too dark for acceptable video shoots (additional lights would kill the ambience in what is supposed to be a candid shoot), and two handfuls of people seriously hinders any movement of any sort. I was lucky in that the Cafe was only half empty on a slow Wednesday night.
When I first saw the room, my first thought was to turn around and back out the door but then I thought that this would be a good opportunity to test the limits of the Sony APS-C sensors: the stretched-to-the-limit 24MP on the a65 and the soon-to-be--legendary 16MP on the a57.
The a65 had the 16-50 f2.8, video capped at ISO1600. the a57 had the 35f1.8, video capped at ISO3200. I cannot back my conclusions with any scientific date but the a57's 16MP sensor is far and away the winner in low light. I don't care for low noise, low grain, or artifacts. To me, content is king, and everything else is  secondary. Being there, and capturing the moments, with the least amount of intrusion is of paramount importance.
All the frames have been cropped to varying degrees, including  panning and zooming crops, and the exposure and colours are as they were captured. Most of the panning and zooming was done in post! The large sensors allow for extensive cropping in pans and zooms! I don't think this feature is emphasized enough in the camera ads.With more time, I'll be able to play around with effects, gradation, etc. There will also be 2-3 more videos from the same performance.
The audio is strictly from the  Sony a65, the stationary cam, or B-cam (the a65 is much inferior to the cheaper a57 in terms of audio capture and video quality in low light) using a Rode Pro mic. The video is in its rough'ish stage and I haven't incorporated the audio from the Zoom H4n which was situated beside and 2 feet above the a65. The audio from the H4n is to my ears, CD quality! The a65 audio may sound tinny but the music already sounded tinny in the room and the audio as it stands now is a very good reproduction of how I heard the music. The H4n shoud be the device of choice for bootlegging live shows.

I'm just now editing a wedding I shot last week where I have to sync the h4n audio with the video...fun, fun, fun
Enjoy!
at April 12, 2013 1 comment: Links to this post 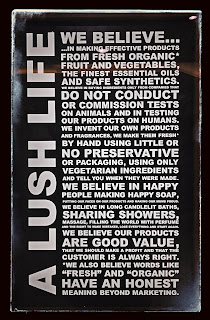 There's nothing like a good rant to rouse one up...

... from the stupor induced by a life far from the unpleasant. True stuff.
at April 08, 2013 No comments: Links to this post 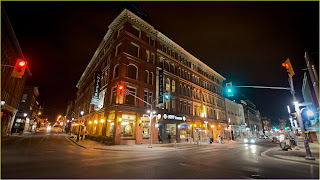 The historic Walper Terrace Hotel in Kitchener at 11:45 pm (after a wedding shoot). Aapril 6th.
at April 08, 2013 No comments: Links to this post

iPhone Diaries #598: The woman in the mirror 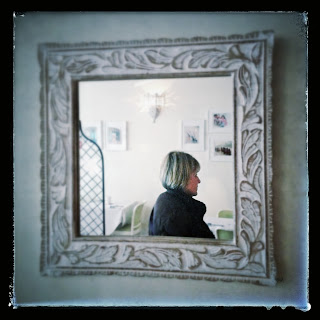 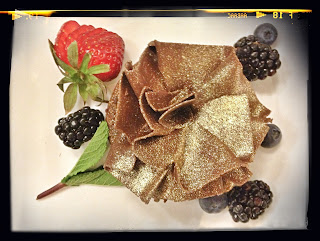 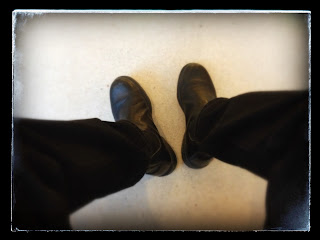 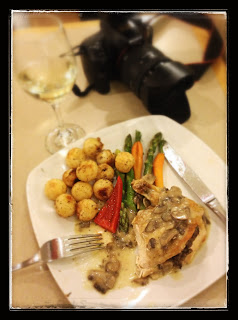 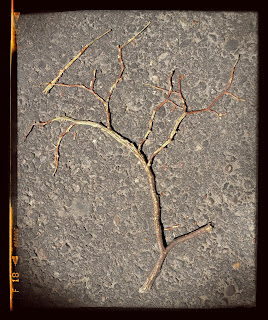 on the laneway between Elm and Edward. April 4th.
at April 04, 2013 No comments: Links to this post

gay rights equals human rights, and other no brainers

Here's another no-brainer: stricter gun-control measures, the more the better.
Here's another no-brainer: the concept of karma. You've got your water cycle, carbon cycle, ashes-to-ashes, dust-to-dust, etc. Different shades of karma.
And here's a biggie: climate change, or is this just universal karma working it's wonder. 200 years of industrialization and planet rape will do that to you.
Still waiting for karma to work its magic on the world's three monotheistic religions.
Karma's a bitch.
at April 04, 2013 No comments: Links to this post 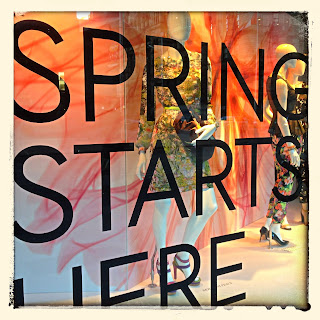 It's damp with sub-zero temperatures, and the Robins are chirp-vering). 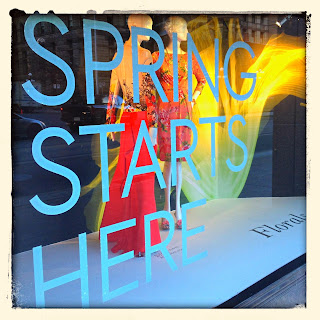 or how to marry the digital and the mechanical for stunning imagery!

From the Golden Gate Bridge to Alcatraz to the Bay Lights at night, see the Bay Area's most iconic locations like you've never seen them before. Shot in 4K/"Ultra-HD," Teton Gravity Research presents the first footage from their new RED Epic-equipped gyrostabilized camera platform: The GSS C520. The GSS C520 is a portable 5-axis system that houses a range of leading digital cinema cameras, like the Epic and Sony F55, while also capable of integrating future advancements in camera technology.
Directed by: Todd Jones, Aerial DP: Carston Bell, First AC: Brian Wulf, Editor: Blake Campbell, Produced by: Teton Gravity Research
at April 01, 2013 No comments: Links to this post