A huge boon for democracy; and "I told you so!" 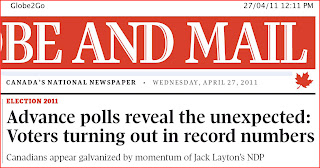 Last April 6th, amidst all the gloom and doom of a predicted "historic" low voter turnout as foretold through the histrionics of the self-appointed oracles of public sentiment (the pollsters), and abetted by an analyses-starved, poll-dependent media, I entered a blog entry entitled  Federal Election Results: A Prediction. As well, I stand by my prediction that the Liberals will form a minority government, notwithstanding the current rise-through-the-ranks of the NDP. I also still think that Elizabeth May will win the first ever Green Party seat in Parliament.
As pointed out in the Globe and Mail article, this rising tide of voter activism may be traced back to the very first "vote mob" in Guelph as well as through the efforts of countless young people organizing around, and blogging on, current issues (See Ben's blog ). 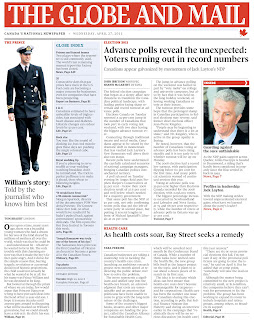 This is a cautionary tale to pundits who think they know the mood of the country; they may correctly gauge the current mood but they also have to be aware of the national psyche: Canadians aren't stupid and will always see through the politician's public pronouncements and private machinations.
It is a great country!
at April 27, 2011